A collaborative culture with shifting responsibilities is the burger brand’s recipe for success.

This story appears in the March 2020 issue of Entrepreneur. Subscribe »

In 2003, as the story goes, New York City restaurateur Danny Meyer scribbled some burger-based ideas on the back of a napkin. That eventually became the inaugural menu for Shake Shack, an outdoor food stand in Manhattan’s Madison Square Park. The burger concept has now grown into an $839 million restaurant chain with 281 locations worldwide. The current menu has stayed close to Meyer’s original vision (cheeseburger, mushroom burger, crinkle-cut fries) even as new items are conceived of and tested at the company’s Innovation Kitchen in New York’s West Village. The corporate team works just upstairs, and like the brand, their jobs are constantly evolving: A shift manager was sent to Shanghai and an art director helped out with the brand’s IPO. Here’s how the team creates success out of such simplicity.

“Because of Shake Shack, I’ve literally seen the world — for new store openings, I’ve been to Hong Kong, Shanghai, and the Philippines. It’s been phenomenal. Even though they spoke different languages, the Shake Shack language and culture was the same everywhere. That’s the best part.”

“Everything is growing so fast around here. The common space really lends itself to hanging out and working together. Every now and then, a tray of ShackBurgers will show up and we’ll all convene around them. That’s a huge part of the environment.”

“I lead the creative team, and people think we just do menus or signage, but it’s more than that with Shake Shack because we’re seen as a lifestyle brand. We’ll work on any creative, from T-shirt swag and promo giveaways to social media graphics and billboard signs. I never thought I’d be working on an IPO, creating branding for the certificate for our stock. But those are the types of opportunities here.”

“For the monthly supply-chain department meeting, which usually happens around lunch, one of us is always responsible for the menu. You can either cook it yourself, tell the chefs what you’d like, or cook it alongside the culinary team. A few months ago, a team member and I partnered up to cook a full-blown Puerto Rican–Dominican fusion meal in the test kitchen.”

“I oversee the U.S. growth of our company-operated Shake Shacks, so I work with our CEO and CDO to create the strategy for where to expand, and then we travel together to find the spaces. Recently, the process has changed a lot. When we were newer, it was more of a gut feel — it was our customers who were telling us where to open next. Now we’re using more of a data-driven process to complement our instincts.”

“I joined the company 11 years ago as a line cook. I served as manager and senior general manager before becoming area director. Starting from the bottom, I got to learn everything, from the perspective of our hourly team to our high-level goals. That’s served me well in being able to bring people up as I’ve moved forward. What’s really made me stay is our commitment to employee growth.”

“I’ve been here for 12 and a half years. When I joined, the menu was somewhat static. Simple. But we realized that that’s not a lot of fun. We started to pay attention to what our guests were asking for — and they were asking for bacon. So in 2012, we added the SmokeShack, a cheeseburger with smoked bacon, ShackSauce, and chopped cherry peppers.” 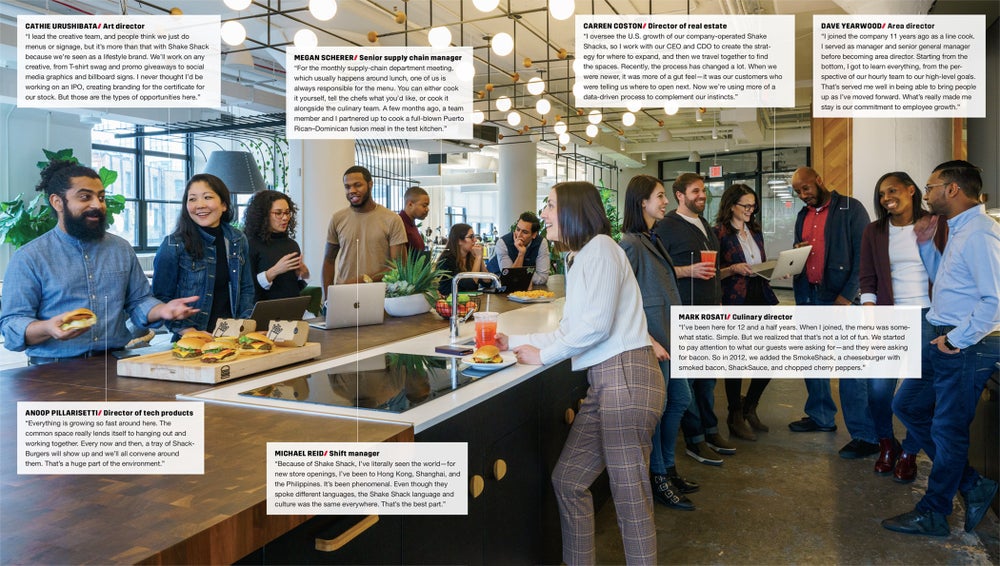