Corporate harassment training is frequently specified by compulsory yearly workshops, stock photo-ridden curricula and, typically, out-of-date situations. Harvard finishes Roxanne Petraeus and Anne Solmssen think there’s a business in doing much better than that. The duo co-founded Ethena, a software-as-a-service start-up that offers anti-harassment training software that is more extensive and versatile than the status quo. Ethena sends”pushes,” or customized short-form littles training content, to staff members throughout the year. One push could be about workplace dating, and a couple of weeks later on, another nudge could be about mentorship. Monthly a user would get either an e-mail or Slack notice stating it is time to train.

Then the user would go to a browser-based app and take a lesson, which depends on your supervisory status, state of house and other factors. The sessions would then be 5 to 10 minutes. The distributed technique takes away the ability for an employee to front-load hours of training on their very first week. Rather, Ethena’s consistent check-ins are targeting at a hard metric to track: understanding within compliance training. “The factor we do that is because in the adult learning base it is quite emphatic that repetition is crucial,”Petraeus said.

This format likewise gives the business an opportunity to adjust its content to the world users are residing in. Ethena’s content needs to follow a particular curriculum based on state law, but, it can include its own taste. When COVID-19 became a severe threat, Ethena was able to send out users training in regards to online harassment and cyberbullying. Old curricula might not account for what Zoom harassment might look like.

Petraeus stated of the examples users see in the software application, “it makes no sense to have Jim and Jan go to a bar if that’s not the environment we are in.”

Ethena likewise works as a replacement for in-person anti-harassment workshops during COVID-19 and resulting shelter-in-place orders. As offices continue to stay shut down, companies need to find new ways to speak about concerns that are not disappearing.

Effectiveness of anti-harassment training is difficult to track with numbers. If a business tried to determine Ethena’s effectiveness with information around the number of harassment reports filed prior to and after the software application was used, it presumes that victims are selecting to report in the very first place. Victims, for a range of factors, frequently do not report due to fear of retaliation or inactiveness.

For the co-founders, a lack of tough information about whether their software works suggested that they had to find another way to pitch to clients.

“It would be truly reckless to just kind of count on ‘everybody will think in this objective with us,'” said Petraeus. “We read the newspaper; that will not happen.” 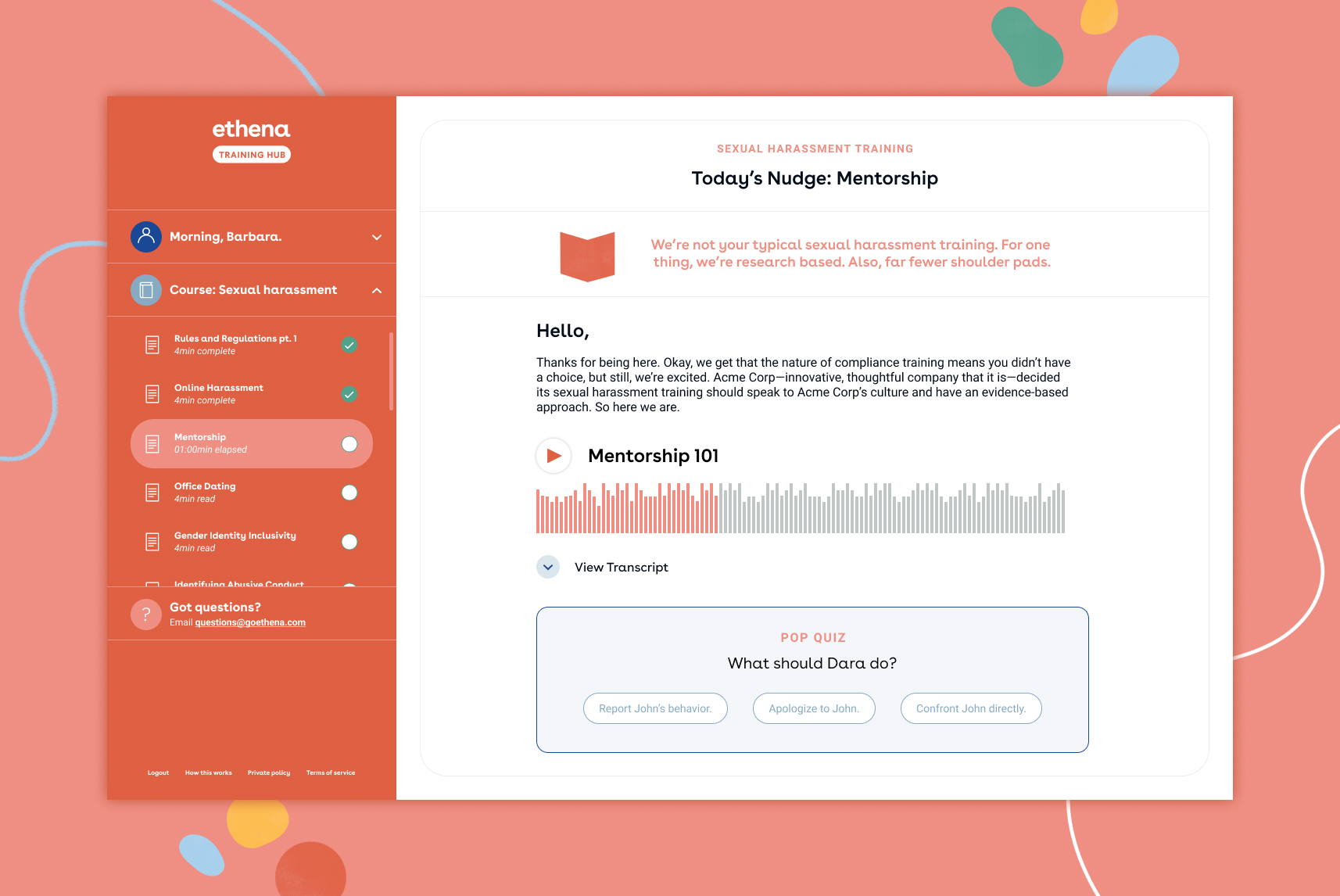 Instead, the co-founders believe that sweeping training regulations and legal commitments might be what force companies to onboard more intensive software.

“We keep business in a lawfully, extremely safe position since their staff members are constantly sort of ahead of what they need to stay certified with state regulations,” Solmssen said. “We have the ability to become a part of the material of daily thinking and behavior for workers.”

Long term, Ethena is dealing with a peer-reviewed journal to see if reliable anti-harassment training can be related to greater retention rates in business.

The business imagines early adopters to be little business that are scaling. It charges companies per seat, which comes out to $4 per employee each month, and $48 per staff member annually.

Petraeus and Solmssen piloted the program in November 2019 and launched in January. Today, the start-up told TechCrunch they have raised $2 million in seed funding led by GSV, with participation from Homebrew, Village Global and more. It has 50 consumers.