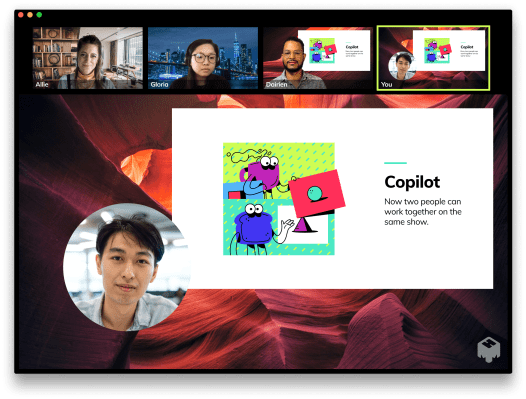 mmhmm, the most recent job from Evernote creator Phil Libin and All Turtles, has today revealed the launch of the mmhmm Beta 2. The 100,000-strong waitlist of people who have asked for gain access to are getting their welcome to the platform today. Part of the beta 2: a handful of brand-new features for the video discussion software application. Most notable among them is Co-Pilot. Co-Pilot enables two users to’ drive ‘the presentation simultaneously, with one user speaking and visible and the other running the controls of that presentation, changing slides, playing video and/or changing the look.

Let me back up for those of you who’ve (not surprisingly) missed the mmhmm news in the past few weeks.

If Twitch got together with the production group for a late night talk show, and their resulting love kid enjoyed corporate discussions, that baby would be called mmhmm.

Basically, users can elevate their on-screen virtual presentations from a head in a box (or in some cases a screen-shared slide deck) to a more elegantly produced affair.

mmhmm users can run their discussion from a PIP (picture-in-picture) window, alter the size of themselves on screen, add interesting filters and effects, and do it all on the fly.

And as enjoyable as that might be, there is a lot associated with running a live production while also offering a presentation, which is why mmhmm is presenting Co-Pilot. Co-Pilot provides users the opportunity to have their very own executive producer assist them with their call, permitting the presenter to focus on what they’re stating instead of the mmhmm controls.

Considering that Co-Pilot is multiplayer, beta users can welcome one friend each day to the platform starting now.

Along with Co-Pilot, mmhmm is likewise introducing Dynamic Rooms, which offers users the ability to create a background special to them, selecting the colors, shapes, and so on to have your own ‘template’.