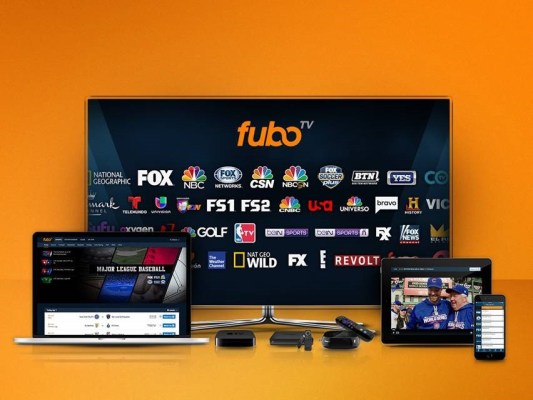 FaceBank is not a household name, but is a developer of hyper-realistic digital humans — including those of celebrities and consumers — for use in emerging technologies, like VR and AR, as well as in live entertainment, interactive, media, social networking and AI-driven applications.

You may remember the company from its creation of the hologram of Michael Jackson at The Billboard Music Awards in 2014, when it was then called Pulse Evolution. It also created a virtual Tupac in 2012, and owns the rights to develop digital representations of Elvis Presley, Marilyn Monroe and others. The company has also worked to create virtual creatures and characters in movies like “The Lord of the Rings: The Two Towers,” “Star Wars III: Revenge of the Sith,” “Transformers,” “Benjamin Button” and more, per its website.

According to the proposed merger agreement, the plan is to create a leading digital entertainment company that combines fuboTV with FaceBank’s IP in order to create a content delivery platform for both traditional and “future-form IP.”

That is to say, you’ll be able to stream your live TV and these virtual/digital human performances on one platform, it seems.

FuboTV also says it plans to leverage FaceBank’s IP sharing relationships with leading celebrities and other digital technologies to enhance its sports and entertainment offerings.

“The business combination of FaceBank Group and fuboTV accelerates our ability to build a category-defining company and supports our goal to provide consumers with a technology-driven cable TV replacement service for the whole family,” said fuboTV CEO David Gandler, in a statement. “With our growing businesses in the U.S., and recent beta launches in Canada and Europe, fuboTV is well-positioned to achieve its goal of becoming a world-leading live TV streaming platform for premium sports, news and entertainment content. In the current COVID-19 environment, stay-at-home stocks make perfect sense – we plan to accelerate our timing to uplist to a major exchange as soon as practicable. We look forward to working with John and his team of creative visionaries,” he added.

“As a tech-driven IP company, FaceBank was looking to find the perfect delivery platform for its celebrity and consumer-driven content, with a dynamic user interface that could support the global consumers’ rapidly evolving practices of content consumption,” added FaceBank founders John Textor and Alex Bafer. “David and his team have a clear vision of the future and fuboTV’s technology is second to none among the disruptor class of content delivery – a perfect match for FaceBank Group,” their statement read.

FaceBank is buying FuboTV — or merging, as the legal wording appears to indicate — for preferred stock, the SEC filing reveals. The new shares, dubbed “Series AA Convertible Preferred Stock,” will have 0.8 votes per share, and convert to two shares of common stock. The acquiring entity changed its articles of incorporation to get rid of all prior forms of preferred shares in favor of the new, Series AA shares. It isn’t clear yet how many shares FuboTV shareholders will receive in the deal, but as the total number of Series AA shares created was 35.8 million, we can note that there is a cap.

FaceBank also says it took out a secured revolving line of credit of $100 million, the first $10 million of which will be provided to fuboTV on April 1 or the closing date of the merger, whichever is later.

The merger will allow fuboTV to continue its international expansion, by way of FaceBank Group’s Nexway — an e-commerce and payment platform live in 180 countries, the company says.

FuboTV was founded in 2015, first as a soccer streaming service, then later expanded into more sports and entertainment. It competes with YouTube TV, Hulu with Live TV, AT&T TV Now and, before its shutdown, PlayStation Vue.

The deal follows several other consolidations in online streaming and media, including Disney’s acquisition of 21st Century Fox, Viacom’s purchase of pluto.tv and Fox Corp.’s acquisition of Tubi. For smaller streamers, it’s difficult to keep up with the rising costs of programming amid competition from larger competitors, like Disney (Hulu’s majority owner) and Google (which runs YouTube TV).

The boards of directors of both companies and the major stockholders of fuboTV have approved the transaction, which is anticipated to close during the first quarter of 2020, subject to the satisfaction of certain closing conditions, the companies said.