With $23 million for its plant-based, liquid meals, Kate Farms pushes into customer and healthcare 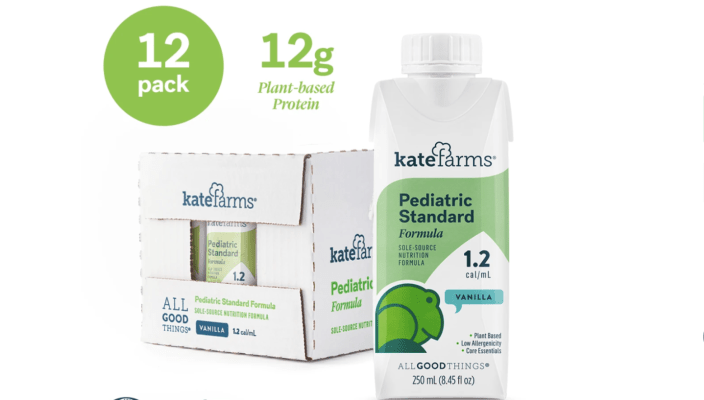 Kate Farms, the provider of a plant-based liquid meal formula used by healthcare facilities and doctor around the country as a dietary supplement for clients who can not process solid foods, has raised$

23 million in a round of funding. The brand-new cash will allow the business to ramp up its production as it looks to meet significant brand-new need from both customers and doctor, according to chairman and president, Brett Matthews.

Founded by Richard and Michelle Laver, who at first established the formula for their daughter, Kate, a child whose spastic paralysis indicated that she couldn’t eat strong foods or process the tube-feeding formulas available on the market, Kate Farms has actually turned into a business that serves medical facilities around the country.

Matthews, whose son experienced upper breathing and autoimmune issues, was first presented to the business as a client. “My boy was really ill … and food was really vital to his healing. I knew a lot about the items and food as medicine and really jumped in and invested.”

From that preliminary investment, Matthews’ responsibilities with the company expanded, initially as chairman of the Kate Farms board and then, ultimately, actioning in to become president of the company.

Throughout its history Kate Farms has raised capital from private, instead of institutional, investors, and the new financing is no different. Capital came from a multitude of heavyweight financiers, consisting of: David Roux, the co-founder of Silver Lake; John Hammergren, former chairman and president of McKesson; Gregg Engles, previous chairman and president of the plant-based dairy replacement business, WhiteWave Foods; and William and Kristin Loomis, the previous president of Lazard and the creator and executive director of HHV-6 Structure, respectively.

That clutch of high-powered founders and executives signs up with backers consisting of Pete Nicholas, the founder and previous president of Boston Scientific; Robert Zollars, the previous President of Baxter International, chairman of Diamond Foods and EVP of Cardinal Health; and Celeste Clark, the former executive team management member at Kellogg’s Worldwide Nutrition.

The cash, which closed late in 2015, is being utilized to ramp production as the business races to meet increasing need triggered by the COVID-19 epidemic and the government’s reaction. Kate Farms is contributing $1 million worth of meals to Meals on Wheels programs across Southern California. The Santa Barbara, Calif.-based company stated that would correspond to approximately 225,000 meals for individuals who require it.

The business’s plant-based, non-GMO meal replacements have been clinically shown to enhance nutrition among kids and grownups who require tube-fed meals. One research study was released in the journal of the American Society for Parenteral and Enteral Nutrition based upon scientific trials conducted with Atlanta Gastroenterology Associates, according to Matthews.

“We can enhance weight gain in the pediatric market,” Matthews said. “And we can improve tolerance.”

The marketplace for medical conditions that require tube feeding numbers around 700,000 in the U.S., with another 150 million people who could use the company’s items for less serious nutritional concerns, Matthews stated. It’s a roughly $3 billion market in the U.S., and $10 billion worldwide.

“Our focus today is on the medical side of it, however you might see where this could evolve,” stated Matthews.